As noted in a previous post, MySQL Connector/Java supports multi-master replication topographies as of version 5.1.27, allowing you to scale read load to slaves while directing write traffic to multi-master (or replication ring) servers.  The new release of version 5.1.28 builds upon this, allowing live management of replication host (single or multi-master) topographies.  This parallels functionality that has long existed for load-balanced connections, and enables users to add or remove hosts – or now promote slaves – for Java applications without requiring application restart.  This post aims to explain how to leverage this functionality (the TL;DR/fun demo is found in the examples section)

Some important methods related to host management include:

There are also some useful management metrics exposed:

The com.mysql.jdbc.ReplicationConnectionGroupManager class provides a number of static methods which can make your programmatic management of host topographies easy.  There are two utility methods:

These methods might be useful for in-JVM management of replication hosts – that is, if your application triggers topography changes.  You could, for example, write application code which periodically reads in a configuration file and applies any changes to host topography without application restart.  More likely, though, you’ll want to be able to manage host configuration from outside the JVM – fortunately, you can do that using JMX.

When Connector/Java is started with replicationEnableJMX=true, A JMX MBean will be registered allowing manipulation from a JMX client.  The MBean interface  is defined in com.mysql.jdbc.jmx.ReplicationGroupManagerMBean, and leverages the ReplicationConnectionGroupManager static methods:

A JMX client such as JConsole (part of the standard Java distribution) enables easy host management on running applications:

JMX can also be managed remotely (from a different machine, not just JVM) if you start the application with the -Dcom.sun.management.jmxremote flag.

This is all very dry without examples, though, so let’s walk through how this can be done.  I’ve written a simple application driver which starts a configurable number of threads, each of which creates a series of connections, then executes a series of transactions against each connection.  Transactions alternate between read-only (work distributed to slaves) and read-write (sent to masters), with random delays introduced between each transaction.  The goal here is to randomize load and simulate a more realistic production deployment environment.  Any SQLException at all will trigger the stack trace to be dumped, so we can easily see if host management operations trigger problems.  The code is found Replication Host Management example code can be found here.

Before I start, I’ve got three MySQL Server instances running:

This can be observed once the example application is started, by looking at PROCESSLIST output: 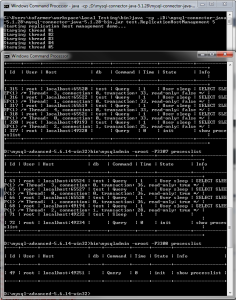 Notice that there are no connections established to the instance running on port 3308.  Now we’ll start JConsole.  From the “New Connection” dialog, I’ll select test.ReplicationHostManagement 5: 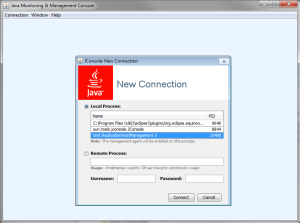 Clicking the “MBeans” tab at the top and expanding the com.mysql.jdbc.jmx tree presents the attributes and operations exposed: 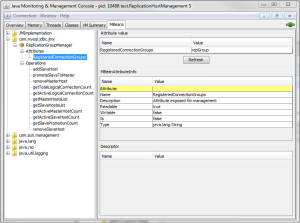 Here, we can add “localhost:3308” to the existing slaves: 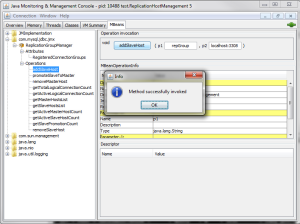 We should now see traffic directed towards that instance, with no problems noted by the application – and that’s indeed what we see: 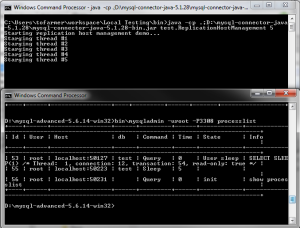 We can also promote the existing slave instance on port 3307 to a master: 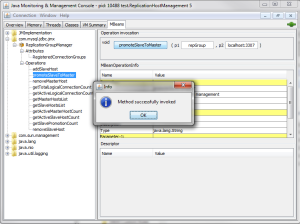 We can confirm this change by looking at the traffic being routed to port 3307 in PROCESSLIST (the comments regarding “read-only” will indicate some read-write traffic is now being directed towards the 3307 instance):

This can also be confirmed using JConsole to get the list of current master hosts: 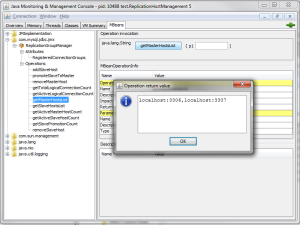 We can also take a host out of the pool of available hosts.  In this case, I’ll remove the instance running on port 3306 (the original master) using removeMasterHost():

In this case, I didn’t specify which connection group to affect.  Chances are good that when you want to take a server offline, you don’t really care which connection group it’s a part of.  Confirmation that the server has been removed from the pool can be seen in the PROCESSLIST output, as connections slowly die off as transactions end and load is re-routed to other hosts: 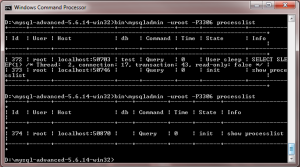 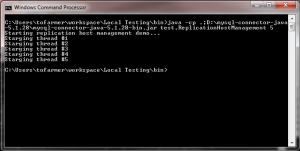 Success!  In this example, we’ve gone from a replication topography with the master on port 3306 and the slave on 3307 to a master on 3307 and a slave on 3308 – and we did it all with zero interruption to the running application.

2 thoughts on “Live reconfiguration of replication topography in Connector/Java”